"Mitakuye Oyasin" is a Lakota prayer. It means "we are all related" or "all my connections".
We are all related, so there is no difference among people, so need for borders. "Imagine there's no country...", using more famous words. I don't know if it is just a coincidence, but I immediately thought at where the Lakota people live: in the never-ending Great Plains. How can you imagine setting a border in a place like that? 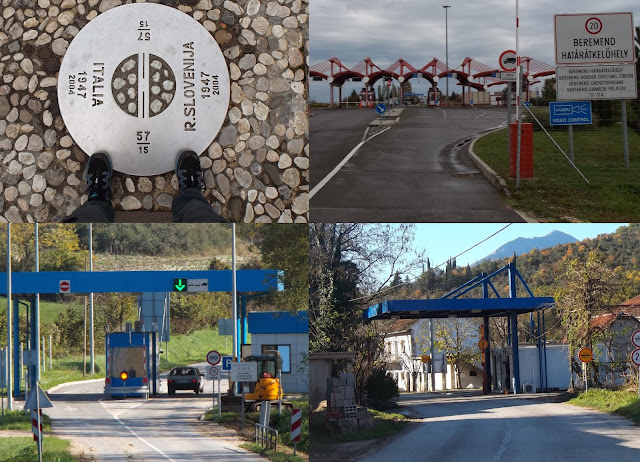 Many people asked me how it is to cross a border on a bicycle. The answer is: nothing special. The first time is fun, then it becomes just a matter of showing your ID (Italian citizens don't need passport for any country that I visited, even for those that don't belong to the EU) twice to the Police of both countries on the border. They might ask you where you are going, and nothing more.

A lot of blood was spilled to determine whether a certain border should be in the place it is or a few kilometres away. Borders changed the lives of many people: am I part of a majority or minority? Was I born in the "wrong" place? Lakota people would not understand this, I bet.

Questions:
1) Why do borders exist?
2) Are borders immutable?

While borders have a certain political and administrative function, I think it is everybody's task to question their existence, at least on a "thesis, antithesis, synthesis" base. Thinking that the current borders have always existed, have historical legitimacy and therefore will always exist is just useful propaganda, most of the times. In fact, borders don't exist, if you try to convince yourself of it.

It seems common to all countries to declare their current borders immutable to prevent parts of their territory to secede and declare independence. For example, Article 5 of the Italian Constitution states: "The Republic, one and indivisible, [...]". The United States of America also don't give the right to secede peacefully to parts of its territory, although the 1776 Declaration of Independence would suggest the opposite, when saying that "[...] whenever any Form of Government becomes destructive of these ends, it is the Right of the People to alter or to abolish it, and to institute new Government, laying its foundation on such principles and organizing its powers in such form, as to them shall seem most likely to effect their Safety and Happiness".

Without aiming at writing a political essay, I just wanted to introduce the topic because I feel that there is too much nationalist crap everywhere in the Balkans (and not only there...). I'm saying it straight just because I started loving the history, the culture and the people who live in this area, and when you love a place you try to understand its past and care about its future.

For nationalists, borders separate "us" from "them". Even though those borders changed several times in the past 100 years, now they can't change anymore, they say. Tradition, culture and language of the homeland must be preserved, apparently.