Counter migration: from a big city to a little village

On my first night in Greece I was hosted by Stelios, who lives in Odigitria, a little village with 30 inhabitants.

Stelios's story is an interesting one: he was born and raised in Athens (population: 4 million people). After working for 3 different companies, 5 years ago he lost his job with Vodafone. He was 35 years old and he had a higher salary than the young people they were probably going to employ on his place (ethical company, isn't it?). Tired of the city life, which he never really appreciated, he decided to dramatically change his life and move back to the village from which his grandparents emigrated many years before. A little at a time he renovated his family's old house, which had been abandoned for 20 years, he got a dog and he started growing vegetables in the garden. 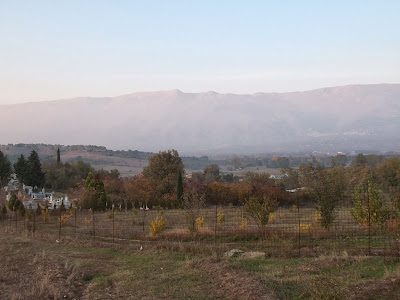 Then the economic crisis hit Greece, changing the life of many people. Now Stelios has a couple of temporary jobs, but he doesn't have a regular one. However, besides the current difficulties, Stelios would never move back to Athens: in Odigitria he found priceless things that he would never exchange with his past chaotic life: following the natural rhythm of the day, listening to the sound of the breeze that blows through the leaves, having an afternoon walk with his dog on the nearby hills right before sunset... He is not even "excluded" from the rest of the world, using Internet for communicating, reading news, hosting people with Couchsurfing and buying most of the things he needs.

Yes, he would like to have some money to travel as he used to do some years ago with his motorcycle. Yes, he wishes the government didn't put such high taxes on his old house. But, on the other hand, Stelios entirely owns his life and his time. How many people can say the same?

The story of Stelios is an interesting starting point to share some thoughts and open a discussion about city life vs rural life: everywhere in the world the migration pattern goes from villages to cities. People leave their native places to go to the cities to study or work. They end up never going back to their hometown, mainly because of opportunities: the city is a magnet which inevitably attracts the "metallic" materialistic part of us (basic needs like money and food, but also "luxuries"). Our dreaming part loses power, but never disappeares, because most city people still dream about exotic deserted beaches, mountain villages and huts, rural heavens, where they usually spend relaxing holidays. Yet, if rural or even "intermediate" areas could offer the same working and social opportunities of the cities, they would not hesitate to move there.

Now, the point is: 2013, Internet, e-commerce. Could it be an opportunity for a new and different development of rural areas? Little villages have been associated with poverty, agriculture, bad education, while cities have been praised for their industry, opportunites, education. Does this make sense in the Information Age? Can the mountain villages in the Alps and the fishing villages of Portugal pursue a new model of development?

Last but not least: the human factor. More people often equals more conformity and less self-discovery. Take Milan, London, Zagreb, Belgrade, Sofia. The cities are different, but people do the same things everywhere. It's unbelievable, if you think at it.
Take Pierre (South Dakota, USA), Cornuda (Veneto, Italy), Mala Subotica (Međimurje, Croatia), Odigitria (Central Macedonia, Greece). These places are unique. There lies the heart and the culture of a country.
Pubblicato da AEuropeanJourney a 12:00 am